After a couple years of delay due to the pandemic, I made my visit to the libraries just past Easter in late April 2022.  I spent the first block of time at the original library in Accra and then the latter two weeks in the small fishing village of Goi east of Accra.  The libraries were full all day because the children were on school break. I came with science experiments, book club ideas based on Anne Frank’s diary, story exchanges with local Canadian grandmothers that I know, and techniques for teaching chess.

Our days were full of reading. The first children would trickle in as the library opened, reaching for their favourites from a collection of books with lots of local African representation, thanks to the genius and hard work of Kathy and librarians such as Vivian who have written and published many introductory reading books – about colours, the alphabet, and local stories – taking photographs with some of the children as the stars. Some children read quietly on their own, but much reading is done communally with several children crowded around a book. The smaller children learn from the older ones as they all read aloud. Story time is held daily with Vivian in Goi being the consummate story teller holding the rapt attention of 90 children for an hour. 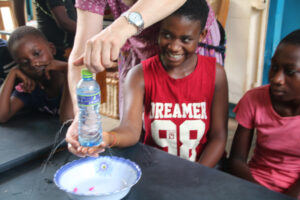 I contributed to the program with my clubs – chess, science, writing and book clubs, and new games such as Wordle.  Within a day or two, interested children had mastered the moves of all chess pieces and were enjoying the game. I must say as an aside that in Goi, it was the adults – Enoch and Promise – who were seen playing well into the evening, engrossed in long periods of thoughtful stares at the board.  The older children journaled along as we read Anne Frank’s daily journals, relating their own thoughts to those of Anne about their families, foods, hobbies, and aspirations. 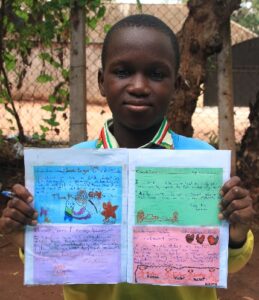 Everyone joined in the science experiments. We drew mazes for the magnets to race through and intricate pictures from graphite in pencils for electricity to flow through while we explored the conductivity of materials. We also made a piano using my little computer combined with onions, potatoes, mangos, and bananas.

The days were full, but it’s the people that stay in your heart.

The children are naturally charming with all their energy and potential.  Yet it is their hunger that inspires, not hunger for food but hunger to learn, to engage, and to participate. The children devour any activities that you open to them with exuberance. They come to these libraries for stories and for lessons on spelling and math while they are on their school break. And, they work for this opportunity: cleaning tables, sweeping floors, and stacking chairs. It is their library. They care for it.

Some children especially touch your heart. My 13-year-old friend Desmond earned his nickname “Tutu” with his quiet demeanor. He tended to the safety of the little ones even while cleaning and setting up and when studiously joining the book and science club with a burning desire for higher education built into his being. Abraham is the rough-and-tumble boy that tries your patience with his physical energy but also falls into bewitched trances when devouring a book, truly experiencing the joy of reading. Winnifred is quiet but her writing reveals both an earnestness and a lightheartedness. She wants to be both a police officer to protect people from harm and a fashion designer to celebrate the joy and beauty of clothing.  And Mark from Goi – a builder of model planes, a portrait artist, and a rock star drummer. 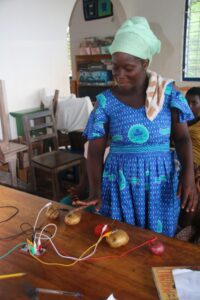 The staff are dedicated and very multi-talented. In Osu (Accra), Enoch is ostensibly the math teacher and the office worker who writes the necessary reports of an NGO, but he also has a clear photographic eye and a creative bent in developing arts activities for the children. Justine is quiet and constantly working preparing and cleaning up after activities, keeping the library books clean and repaired.  In Goi, Faustina is the quiet partner who is always moving to keep children on task and things in their place while Paulina is the active lead, pumping the children into frenzies with songs and dances. Another Enoch – Goi’s Enoch – creates programs not only for the Goi library but for satellite libraries that are being nurtured by weekly tours with mats set up under trees.  Enoch is the next generation raised in Vivian’s library with his eye to the next steps to support his community. I am left in awe by each of them, individually, by their tireless work and their sheer love for their children. Collectively, I see the power of teamwork in the daily dances that they performed in their work together.

I am thankful for the opportunity of staying in these libraries to learn so much from both the children and staff.  The joy of reading – of education – is palpable.  It was an honour to be able to witness the inspired work being done in these community libraries which are so deserving of our support.